There’s always going to be somebody asking why we don’t build our frigates/LPD’s locally. Always.

The opening statement of most of these people is mostly the ridiculous “Philippines is the 4th Largest Shipbuilder in the World” then they follow that up with why not use Pinoy innovation and resourcefulness to design warships, then they say its cheaper and back it up with ridiculous bullsh*t explanations.

First of all, the “4th Largest Shipbuilder” thingy is not exactly, completely true. We are 4th largest in terms of GROSS ORDERS in tonnage. However, almost half of these orders are never completed as they are overrun by delays. If not overrun by delays as the yards are all tied up, it’s either due to a lack of steel or engines. None of which we produce locally.

So yes, while we build hulls, we import the steel and engines from all places, China.

Now why the hell would China export steel to us if they knew it was being used to build warships to be used against them?

It would be prudent to discuss why building warships locally is near-impossible. The lack of steel.

You need steel to build warships. Not just any steel. Marine-grade steel that’s certified as military-grade. We can’t even produce civilian spec steel, how much more military spec?

The most important aspect of ship or warship building is steel production. We do not have adequate facilities in the PH to produce steel for our shipbuilding industry and cheap steel is imported from of all places, China. If we can’t even make steel, how much more warships?

Another thing crucial to ship or warship building is engines. Most of the engines we use for our local shipbuilding industry are also imported, from all, places, friggin’ China.

So two of the most important things you need to build a warship are already un-present in the PH. What next?

You should also consider the vast difference between military-spec and civilian spec ships.

In effect, civilian ships are not built for the frontline.

If you folks still don’t want to believe that, I wonder how many of you can recall the Falklands War.

During the Falklands, the Royal navy, lacking logistics assets, rented civilian tankers to transport their Harrier jets and Chinook helicopters to the frontline. The civilian ships carrying important British assets, proved, however, to be easy targets for the Argentine Mirages armed with Exocet missiles.

Here is the S.S. Atlantic Conveyor, after being hit by two Exocet missiles, the ship stood no more chance and sunk.

The lesson from the S.S. Atlantic Conveyor during the Falklands War should pretty much explain why the hell civilian grade designs should never be in the frontline.

However, military spec ships are built to take beatings.

A milspec ship is built to be able to survive missile hits and sail home for repairs, or delay sinking long enough to evacuate all crew. Milspec vessels have better armored warship-grade steel and better compartmentalization to ensure that the ship doesn’t sink easily.

An example is the USS Stark. An Oliver Hazard Perry class frigate.

The USS Stark was hit by a missile. Yet the damned ship limped all the way home for repairs, and was back in the fray immediately. The Stark is an example of how resilient a military spec vessel is.

The USS Stark, even after getting hit by a missile, the ship limped home for repairs, a testament to how resilient military spec vessels are.

The thing is. The designs for the compartmentalization for military spec ships along with the kind of steel you need to make them isn’t really available. You’d need to pay a high price to get the designs you need to build a milspec warship. Unless we want our ships to sink as fast as the Atlantic Conveyor, we’d need a milspec design which sadly does not exist yet in any Filipino shipyard.

Next is design. We have dozens of shipbuilders here in the Philippines. But only one has actually built a warship and has a design for a warship in its portfolio.

That company is the Australian company Austal. And there’s one little probem with the design they have in their portfolio…

The design for a warship that Austal has in its portfolio is the Independence class LCS. The thing about the Independence is, that while it uses a very stealthy and fast design, it is overpriced (or ridiculously expensive to be more optimistic and positive), underarmed (nearly toothless to be frank, the base design doesn’t even meet the PN frigate specifications yet already costs more than twice the budget the DND has allocated), and is a ridiculous gas guzzler. 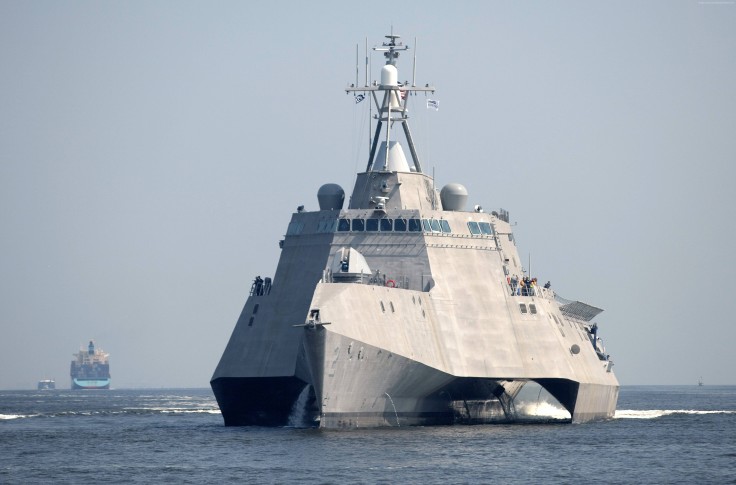 The sole warship Austal has in its portfolio, the Independence-class littoral combat ship. This ship is overpriced for us, underarmed, and is a gas guzzler, making it unideal for the PN on all three fronts.

Oh and the fact that Austal’s shipyard in Cebu at only 80m long is too short to build the Independence or any of its variants being offered.

Transfers of technology to help us with design?

This seems the most probable and realistic way to get a design that we can build locally. Transfer of technology or ToT.

Transfer of technology for navy ships works like this. A country i.e. Indonesia or Singapore contracts a company i.e. Damen or DCNS to build a frigate class for them, however, to provide jobs back home and to take pride in building warships locally, the deal works like this, the company sells them the design along with the first delivery of the ship/s in the class. So now, the TNI or the SAF owns the blueprints for the design to their frigate, and they make the rest locally.

Indonesia got a ToT from DAMEN for PT PAL to  locally build its SIGMA class corvettes and its soon to be completed SIGMA class frigates.

Our own Tarlac-class LPD (blog about that will follow soon) was based from the Makassar-class that Indonesia built under ToT. 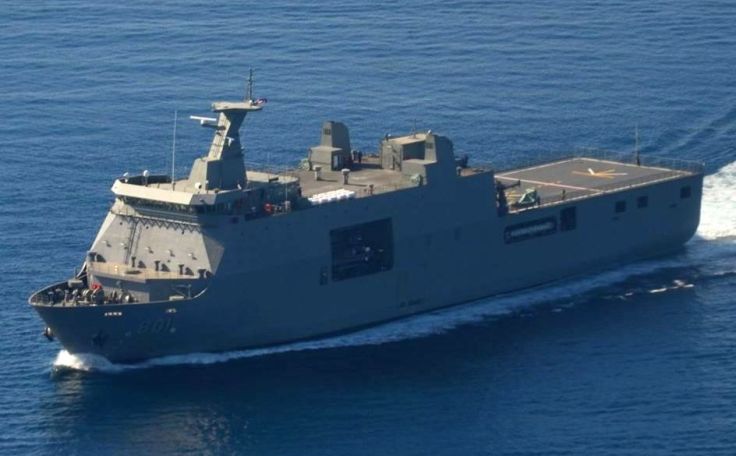 Our own Indonesian-designed Tarlac-class LPD (above) is based on a design derived from the Makassar-class LPD  (below) built by the Indonesians under ToT from South Korea.

And here’s the good news. The Philippine Navy’s frigate program requires a ToT from the bidders! So we might just get the design for a modern warship!

However, we need to remember that having the design from the ToT isn’t enough. If the PH ever dreams of building warships locally, it will take a massive upgrade for our shipyards, and a government-owned shipbuilder like PT PAL or ST Marine might even need to be started. Industries like steel making and metallurgy will have to be upgraded as well.

Oh yes. There is progress, and we’re only at the beginning. Recently we’ve built two LCU’s, the BRP Tagbanua and the BRP Manobo locally.

The LCU BRP Tagbanua is locally designed and built. This could be the start of our warship building industry. 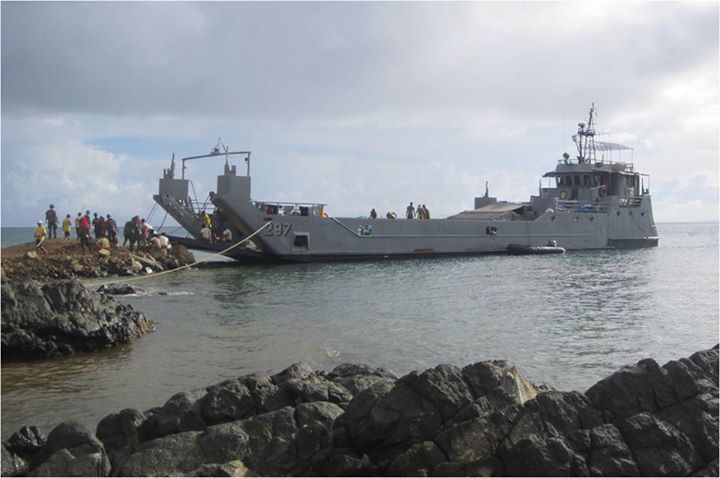 The Tagbanua’s sister ship, the BRP Manobo is also of local build and design. 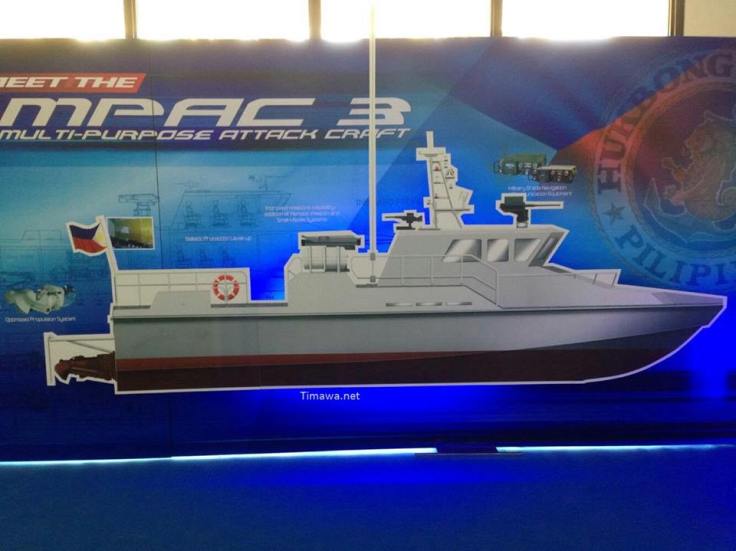 However, our local shipbuilding industry has also made a few screw-ups in the past.

Way back, long ago, the Philippine Navy’s shipyard in Cavite built the two Emilio-Aguinaldo class gunboats.

The PG-140’s or Emilio Aguinaldo-class were not so successful. They tend to roll in even the slightest waves, and they are underpowered and overloaded. They were originally designed to carry an Oto Melara 76mm and AshM’s, and if this pushed through we would have an equivalent of Singapore’s Seawolf-class missile gunboat. However, being underpowered and overloaded, she could not accommodate the 76mm or the missiles to reach her speed of 25 knots. As such, she languished in the shipyard for years until they finally armed her with old Bofors 40mm cannons and machine guns. In fact, one of them, the BRP Antonio Luna PG-141 has been decommissioned due to damage in the hull that was deemed beyond economic repair, and I believe PG-140 BRP Emilio Aguinaldo will follow suit. 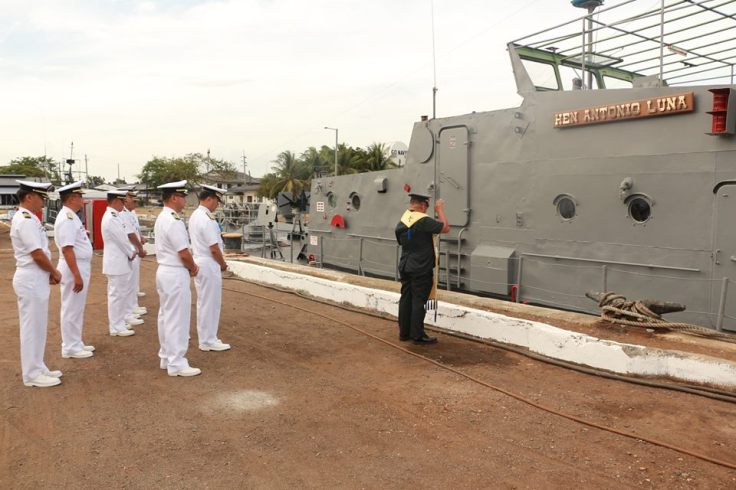 The BRP Antonio Luna was recently decommissioned. Hoping this name will be used for a bigger badder surface combatant someday.

The hull damage, the reason PG-141 was decommissioned.

We need to learn the lesson from the sad fate of the PG-141’s, we shouldn’t build an unproven or bad design. In the case of the PG-14o’s they derived them from the earlier German built Kagitingan class which also had poor performance. So when we build a design, it’s best to build a proven, good one, to avoid mistakes like this.

Overall, while it will be a future prospect in the not-so-far future for the PH to start building warships locally. At the moment, it is best we import them until our shipbuilding industry and other associated industries catch up and have the capability to build a modern warship.

This is a text widget, which allows you to add text or HTML to your sidebar. You can use them to display text, links, images, HTML, or a combination of these. Edit them in the Widget section of the Customizer.